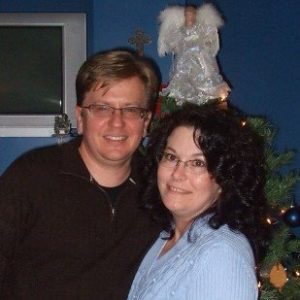 Every day in Northwest Ohio, it is estimated that 15 people suffer a traumatic brain injury (TBI).  Of these injuries, two are severe, requiring extended hospitalization.   The road to recovery for survivors is often bleak.  The Traumatic Brain Injury Resource Center (TBIRC), the first of its kind in Ohio, offers TBI survivors and others with neurocognitive deficiencies, their caregivers, and families much needed support.  Although life for survivors and their families may not return to what was once considered normal, TBIRC is rooted in the conviction that a better life after brain injury is possible in a supportive community.

Jackie and Mike Moore’s experience with TBI began in June 2011 when Jackie was involved in a multivehicle accident while she was stopped for a school bus. Although she suffered only a momentary loss of consciousness, the symptoms that she has experienced over the ensuing months and years have been debilitating. The couple learned that in about 15% of all cases of mild TBI, often referred to as concussion, patients have persistent complications even a year after their injuries. As the couple sought treatment options and answers to their questions, they participated in clinical trials at the National Institute of Health and with the University of Oregon. Along the way, they have learned techniques that help alleviate some of the daily complications associated with TBI.  Jackie had a desire to share these “tricks” with other survivors and approached Mike to start a new organization.

In August 2014, the couple founded the Traumatic Brain Injury Resource Center.  The following Spring, TBIRC, with the support of the community, remodeled a 2,000 square foot facility.  A ribbon cutting ceremony and open house was held in April.  Since opening, the Center has offered group speech, memory and cognitive sessions led by speech language pathology (SLP) graduate students under the supervision of a licensed speech pathologist.  Survivors benefit, learning new techniques and skills to improve their quality of life, while the students gain valuable professional experience with brain injury survivors. In early 2017, TBIRC and Mercy Health Bon Secours announced a new partnership between the organizations at a fundraiser featuring keynote speaker Lee Woodruff, the New York Times best selling co-author of In an Instant: A Family’s Journey of Love and Healing.  Since 2018, an occupational therapist has been working with survivors in a group setting.  In 2019, the Center expanded again, adding an additional suite.  As part of the expansion, a new ADA-compliant kitchen was installed which has become a focal point for the Center and a space for training survivors about the impact of proper nutrition on recovery.  In November 2019, the Center hosted an intimate gathering in the newly renovated space with journalist and TBI survivor, Bob Woodruff.

The Center’s reach extends not only through Northwest Ohio but nationally.  Every month, TBIRC assists hundreds of survivors, family members and health care professionals through one-on-one meetings, phone calls, and e-mails.  Although the Center has had to cancel onsite programming in the wake of the current pandemic, it continues to play vital role in the region and beyond.